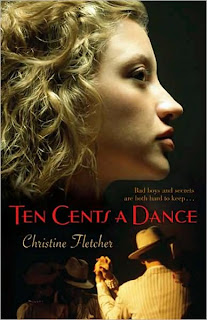 Summary: Ruby's family is barely making ends meet. Her mother's arthritis is so bad she can't work. Her sister Betty is too young to work. And Ruby's job at the packinghouse is utter misery. Then, she hears about a taxi dance hall called the Starlight: a place where she can dance all night and make fifty bucks a week. It might sound too good to be true . . . but Ruby will take that chance.


Three Things to Know About Ten Cents a Dance

#1: The past wasn't always a simpler time.

On the surface, a taxi dance hall seems very quaint, perhaps almost innocent. A man paying "ten cents a dance"--and getting just a dance--doesn't seem to be very tawdry. But as Ruby sees, it's mostly older, lonely men at the Starlight. Many of these men just want to dance with a pretty girl, to not be alone, and maybe just pinch the girl's bottom. But there's also plenty of men, the younger ones, with wandering hands and low opinions. For these men, Ruby's little better than a prostitute; that opinion is quite in line with our modern sensibilities, even if a taxi dance hall was mostly about the dancing.

Christine Fletcher's novel truly puts the reader down in the middle of 1941 Chicago. The language, the clothes, the music--those are easy to accomplish. It's things like the smells that truly allow you to experience this time. The stink of the slaughterhouse, the powder and sweat of the dressing room, the moldy rankness of a bathroom shared by several apartments: these odors infuse this novel, going the extra mile in order to show the full picture of Ruby's life in the Back of the Yards.

One major aspect of this novel is the question of racial segregation and integration. Some girls at the Starlight won't dance with "Flips" or Philipinos. Ruby is introduced to nightclubs called black and tans, where African-Americans and whites can mix more freely than in normal society. Yet beyond the color lines, there's still prejudice and insults. Ruby's mother is Irish while her father was Polish, and this opened her parents to stereotyping from both communities. While Ruby doesn't suffer from this problem much, it still indicates that matters of class and prejudice were not just about race--it was just as much about ethnicity.


Ten Cents a Dance is an insightful look into a practice of which many teens--and just as many adults--were not aware. Tracing the coming-of-age of a stubborn, determined, street-smart teen, this book is a great option for those who want some grit in their historical fiction.
Posted by Melissa Rabey at 12:18 PM

Can I just say, I love how you break your reviews down into "three things to know" or "four things to know." With all that I read and try to remember, this seems like a great technique to remember the details of a book. Great work -- and great reviews. I've definitely got this one on my to-read pile!

Thanks, Kat! I'm glad you appreciate the way I break down reviews.

I've had this book on my to-read list ever since I heard the title and knew it would be about taxi dance halls. Your review makes it sound as if it lives up to my hopes!

I really did enjoy it. It's perhaps a little long, but I don't know if editing it would have improved it; it's just a story with a lot of pieces, and it takes a little while to get them all slotted into place. But I do hope you'll get a chance to read it and see for yourself!