Reading the Salon article "E.L. Konigsburg Brought the City to the 'Burbs" reminded me of just how much I've loved her books--and how much they've shaped me in odd ways.

I got From the Mixed-Up Files of Mrs. Basil E. Frankweiler from my late grandmother, a woman who had an uncanny knack for giving me books I loved.  My introduction to E.L. Konigsburg and L.M. Montgomery were both thanks to my grandmother.

Reading From the Mixed-Up Files was eye-opening for a little girl from Delaware, a true suburban dweller.  I didn't necessarily want to run away to New York and live in the Metropolitan Museum of Art--but I sure did understand Claudia's frustrations as a fellow mother's helper.  Jamie's tightwad tendencies always makes me think of my dad, too.

In sixth grade, I came across A Proud Taste for Scarlet and Miniver, the book that introduced me to the fascinating Eleanor of Aquitaine.  I still remember my mom special-ordering the book for me from the local Waldenbooks, because I had to have my own copy.  To this day, it's my favorite Konigsburg--a fact I was lucky enough to share with her at Book Expo America a few years ago.  I still hope, someday, that someone will write a book about Eleanor's granddaughter, Blanca of Castile, who was chosen by Eleanor to be queen of France, all based on Konigsburg's amusing version of this story.

A lesser-known but really amazing book by Konigsburg is Father's Arcane Daughter.  For a children's book, it's not watered-down (a highlight of all her books, really): there's flashbacks, adult narrators, and a compelling look at how we pity those who are different from us, those that we see as less than us.  I also see it as a bit of a love letter to Pittsburgh, a city where Konigsburg lived and that she recreates in the book.  Father's Arcane Daughter has a lot of similarities to the later Silent to the Bone.  (Gah!  I just saw on Amazon that there's a Kindle edition of Father's Arcane Daughter, retitled to My Father's Daughter.  Talk about missing the point . . .)

Email ThisBlogThis!Share to TwitterShare to FacebookShare to Pinterest
Labels: a proud taste for scarlet and miniver, e.l. konigsburg, father's arcane daughter, from the mixed-up files of mrs. basil e. frankweiler

Another five hours down! 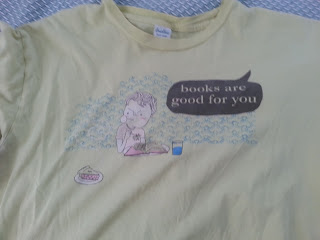 Gaining inspiration from this shirt to push through for some more reading!

I fell asleep early last night (I blame the wine I had with my dinner) so it took me until 1pm EST today to get another five hours of reading.  In that time, I:

--Finished The Moon and More.  At times, I was annoyed with Emaline not revealing how she was feeling, but I knew that was part of her journey.  It was good to see the back of Theo, that's for sure.

--Read Hero by Alethea Kontis.  I really enjoyed Enchanted and was happy to get this ARC at BEA.  Maybe I wasn't paying enough attention during different points of the story, though, because the plot in this one didn't make a lot of sense to me.  I did like Saturday, the Woodcutter daughter who's at the center of this story.

I'm not sure if I'll get much more time today for reading, but I'm happy with the ten hours I've done so far!  It's been a great challenge.
Posted by Melissa Rabey at 1:27 PM 1 comment:

First off, a picture of who's keeping me company during my 48 Hour Book Challenge. 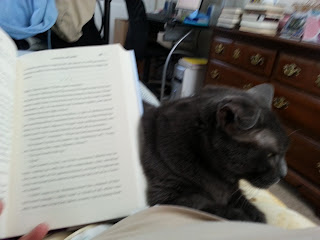 So what have I done so far?

--Finished How Zoe Made Her Dreams (Mostly) Come True by Sarah Strohmeyer.  I had really enjoyed Smart Girls Get What They Want, so I snapped up Zoe.  However, while I enjoyed it, I didn't like it as much as Smart Girls.  I had problems connecting with Zoe, and the plot's sprawl confused me.  YMMV, of course.  BethReads reviewed this one and really liked it.

--Read more of The Moon and More by Sarah Dessen.  First off, I must have read the first chapter somewhere (I think maybe it was on Sarah Dessen's blog) because the deja vu was eerie.  And, not to be too mean, but even Sarah Dessen doesn't write so similarly to herself that I'd get deja vu if I hadn't already read chapter one.  I'm about 2/3rds done, and it's your classic Sarah Dessen so far.

--Completed The President Has Been Shot!: The Assassination of John F. Kennedy by James L. Swanson.  I really enjoyed Chasing Lincoln's Killer, so I was really happy to grab this ARC from the Scholastic booth at BEA.  And this one doesn't disappoint.  Although the historian in me was wincing somewhat at some of the blanket statements, for a book for young readers it still does a really great job of presenting Kennedy's assassination.  The sections detailing Jackie Kennedy in the aftermath are heartbreaking.

Thank you to everyone who commented on my kick-off post!  Since I've done five hours, I will now spend the rest of my social media hour visiting a few blogs before I stop reading and do some real-life adult things, like errand-running and cleaning.  More reading later!
Posted by Melissa Rabey at 9:39 AM 3 comments:

Email ThisBlogThis!Share to TwitterShare to FacebookShare to Pinterest
Labels: 48 hour book challenge, how zoe made her dreams mostly come true, the moon and more, the president has been shot

This is the first time I've done this (and I'm still a smidge confused by everything) but here goes nothing!

This is my TBR pile for the weekend.  Note the e-reader!  Which hasn't been loaded up yet with the e-ARCs I have waiting for me; that will happen tonight. 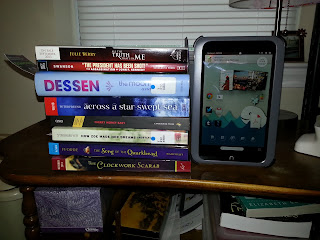 I plan to run my 48 Hour Book Challenge from 9pm Friday to 9pm Sunday.  Happy reading!
Posted by Melissa Rabey at 7:34 AM 10 comments:

Yeah, I know I kind of fell off the face of the earth when it came to blogging.  But there were reasons.
--I wrote a genre guide to historical fiction, which meant I read part of over 700 books in just over a year.
--I immediately followed that up by serving on the Printz and reading a ton.

I knew after those events that I would need to make my life easier when it came to reading.  That I needed to take some time off.  And in the process, I dropped blogging.  I didn't stop reading; anyone who follows me on Goodreads knows that.  But doing the blogging thing just lost its appeal for a while.

But after I read GreenBean TeenQueen's great post on After Committee Reading Slump and attended BEA, I decided I'd like to try to get more active again.  To start sharing my book thoughts again and see what happens.

I plan to participate in the 48-Hour Book Challenge this weekend (for the first time ever!  In previous years, I was working and just couldn't accommodate it) which will help jump-start the blogging.  I'm looking forward to wading through my TBR pile and enjoying some of the ARCs I got at BEA as well as books that have been waiting too long for me to read.  This year, the 48-Hour Book Challenge will be hosted by Ms. Yingling and Abby the Librarian.

So here goes nothing!

Posted by Melissa Rabey at 8:43 AM No comments:

Email ThisBlogThis!Share to TwitterShare to FacebookShare to Pinterest
Labels: librarian by day 2.0

Review: All These Things I've Done

Summary:  In 2083, chocolate and caffeine are illegal, water is rationed, and Anya Balanchine is trying to hold her family together.  Her grandmother is dying, her older brother Leo is mentally disabled due to a childhood accident, and Anya has two years before she turns eighteen and can be legal guardian to her little sister Natty.  To make matters worse, her family is well-known as chocolate smugglers, yet Anya is beginning to fall for Win, the assistant DA's son.  All Anya wants is to stay out of the family business, yet it seems that she's destined for it.  Will she choose to be a bystander or a participant?

Set in a realistic future, All These Things I've Done is a character-driven novel, one that is different from other YA novels.  It's not as plot-focused as you'd expect from Gabrielle Zevin, the author of the intriguing Elsewhere and Memoirs of a Teenage Amnesiac.  Some things don't work in this novel, like Anya's occasional asides to the reader and a few contrived coincidences.  What does work is the character study of Anya.  With her tough-as-nails exterior, Anya tries to conceal her fears and worries.  Her relationship with Win gives her a momentary respite, but Anya is too practical to let romance interfere with her duty to protect her family.  Fans who liked Wither will like All These Things I've Done even more.

Email ThisBlogThis!Share to TwitterShare to FacebookShare to Pinterest
Labels: all these things i've done, reviews

Summary:  In the small town of Melva, North Carolina, Janice Wills knows what group she belongs to: Socially Unimportant Intelligent Girl.  As a budding anthropologist, Janice has made it her goal to have her research on Melva's adolescents published in Current Anthropology before she graduates from high school.  She's the kind of girl to take notes and remain detached in order to observe everything; she's not the kind of girl who'd enter Melva's Miss Livermush Pageant, in spite of her mother's encouragement.  Yet slowly, Janice begins to see the flaws in her research methods.  She's not clever and smart and observant--she's mean and closed-off and scared.  With the help of old friends and new challenges, Janice looks at her world with a new set of eyes.

A coming-of-age story with a different slant, The Rites & Wrongs of Janice Wills combines a realistic protagonist with some engaging thoughts on teenage culture.  Janice has a lot of growing to do over the course of the novel, and her growth comes believably, with a few missteps along the way.  The focus of the novel is Janice's development, set against the backdrop of her small town.  A quick read that includes a dash of romance and some good friendship issues, this first novel occasionally descends into stereotypes and cliches.  Yet there's still an engaging sweetness to this novel, like taking a few bites of pecan pie.  The Rites & Wrongs of Janice Wills will be enjoyed by fans of novels like The Sweetheart of Prosper County.